The stimulus plan, quietly signing an executive order which will change the voting districts in the US, and reversing President Bush's order to stop funding to foreign countries for abortions are just a few things that the new president has done in his first weeks in office.

What exactly is his long term plan? We already know that he is trying to steer this country as far left as possible and he is using the help from the Democratic majority in congress. His speeches still sound like campaign speeches and he is touring the country to promote his socialist agenda. This is what I believe President Obama wants to do. 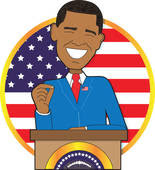 It is all about getting elected.

In my opinion President Obama is not a great leader but he is a brilliant politician. He knows how to persuade the American people into thinking that government is the only thing that will pull us out of this economic mess. Even though he is already in office he has been acting like he's still on the campaign trail. And the media love affair is still going on. How long is this going to last?

Before we turn into a country similar to the socialist nations of Europe we need to do something. Write to your senators and congress men and women. Voice your concern about the stimulus package and the direction this country is headed. In 2010 vote for representatives that will work for you and not for Obama's socialist agenda. Only you and I can change the direction of this country. Our voices need to be heard.

Cascia
Posted by Cascia Talbert at 5:31 AM

Yep! I heard on Fox news the other day two clips just a couple of weeks apart. The first stated that government can't save them, it's small business, etc. This week it was "only the government can save us!" For me, only Jesus can save us!
Thanks for stopping by my blog today!

Hi....
How awesome! Thanks for sharing!

thanks for stopping by my blog. and like Tess comments- we think along the same lines

Fellow conservative here! Great blog! Thanks for stopping by my bloggy today:)

Thanks for commenting on my blog. Although I am not as opposed to Obama as you are (and actually am a supporter), I have my reservations about him. I too hate how people act like he's a savior or something. Like my husband says, he's a politician. I think that says enough!

I have to agree...I think he charmed the American citizens into voting for him!

I agree!!!! We all need to do something. Thanks for commenting on my blog. I will definitely be back.

I'm ready to move to canada!

I do not like this stimulus plan...not one bit. I don't know many people who do!

hi cascia - thanks for visiting my blog. you've got some excellent posts. keep it up.

Hi, thanks drop at my blog and your nice words ;)

Having moved here from Canada nearly 10 years ago, the writing is definitely on the wall.

All of the programs that hurt the hard working law abiding citizens in countries that support big government, are being introduced here.

Jen commented that she's ready to move to Canada, lol, with the law makers that are in office right now, you won't have to, it will be just like that here in a few years.

Thanks for visiting my blog :)

Yes, I agree. We are losing more of our democracy all the time. Thanks for the reminder to stay active. If we are passive and do nothing it will happen much faster. Thanks for being a voice of reason!

Great blog. THanks for reading me today. I don't understand Entra card yet. I tried it out but WHAT is it about...

I'm a bit of a political moron, and I appreciate your political posts b/c it gives me something to think about!

Hi, thank you for visit and message. I totally agree with politicians having good talks. But then, the real measurement of his governance would be his action.

You write well. Take care always.hope to see you again in my blog!cheers!

Take Two and Call Me in the Morning